This issue may fall into the "you'll be sorry you done that" category for sure. Up in the Heritage District there's a church. They have a tiny parking lot. Consequently, during church gatherings, cars are parked on both sides of the street, which is rather narrow to begin with. There's not much for sidewalks either. In the winter when snowbanks are present, you can barely drive through on a Sunday morning.

There's been a fuss going on for a while now about how to address the parking vs traffic problem. There is a safety concern that some churchgoers might meet their maker before they get a chance to confess the past weeks sins, so the Town fathers were asked to see what they could do to solve what is in reality, not a Town problem. I don't remember anyone getting clipped so far, but I have no proof of that.

Sidewalks were suggested and shuffled off the table due to the cost and narrowness of the road. It eventually boiled down to trying to slow down the flow of traffic. The State controls this section of road and was consulted. Traffic studies were done and an eventual agreement was made to install some "traffic calming devices". Types and locations will be dictated by the State. The church has agreed to bear the associated costs. Apparently, nobody asked exactly what those things would look like.....until now.

The description mentioned at a recent Selectmens meeting https://vimeo.com/350131425   (jump ahead to 20 mins) talks about some type of flashing sign similar to the one pictured here. 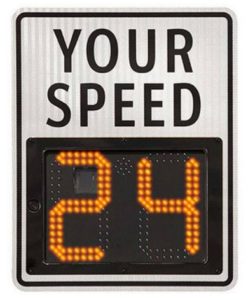 What makes this hilarious is that the State has chosen a spot in their right of way that is apparently in front of Heritage Commission chair Pam Wiggin's property. The whispers are that she is pitching a fit about it and using all her pull with the Selectmen and folks like Connie Twombley to get it moved away from her property. She's even asked for an audience with the Selectmen at a future meeting. It will be interesting to see if she is treated differently than anyone else.

The Heritage Commission has done some good things like preserving some old buildings in Town. I think we have more museums than Manchester. I'm not sure if trying to control what folks can do with their property, as the Heritage Comm. has done with some warrant articles and changes to development regulations qualifies as a good thing. I have often thought that they have taken directions that were never intended. I will write about that in another post.

To have blinking signs in an area that was supposedly designated to be frozen in time, in front of the person's house who has no problem initiating regulations designed to control others, reinforces my faith that the universe is balanced. Quick, somebody take a before and after picture. It's a fact that the church needs more parking for parishioners. It's true that we all want folks to be safe. There are ways to address this like a shuttle to and from a public parking area or finding a piece of land. How has it become OUR problem? And do you really think that some flashing signs will slow down the worst offenders? I wish you good luck with that.