“Get off my lawn” is a famous quote made by Clint Eastwood in the movie Grand Torino. It seems to be a theme that could be applied to a new Town story that’s worthy of a Hollywood drama. I am posting this in advance of the August 14 Selectmens meeting where this issue will be discussed so folks may be informed and make up their own minds. It looks like the Selectmen are gonna need a magic wand or some divine intervention as they try to make everyone happy on this issue.

For three years now, there has been an organized movement to address speeding issues in the Wakefield Historic District. It’s a congested area many times a week often due to activities at the Congregational church. Because the church does not have adequate off street parking, you will often see parked cars lining either side of the street. Sidewalks are minimal. Folks crossing the street take their life in their hands as speeding cars fly by.

As ideas began to come together, it was Peter Brown (now deceased) of the Heritage Commission who initiated the process of asking Selectmen to help find solutions. Everyone who was asked, including the Selectmen, the Police Chief, church representatives, neighborhood residents, and the State DOT all gave their time and efforts as they put their heads together to help solve this problem. Multiple approaches were used with the eventual decision of installing “traffic calming devices” as a final step. After much consideration and research, two signs, which cost about $7000 were purchased BY THE CHURCH:  https://www.elancity.net/evolis-radar-speed-sign/

Through the generosity of Nancy Spencer Smith and the Alden Young Trust, the church didn’t even have to use their own funds to purchase the signs. The whole process was recently summed up in a letter from the Nicastros, who own the Wakefield Inn. Have a look. Page 2 is especially revealing.
Click for larger view. 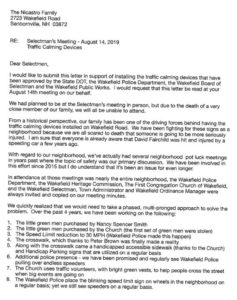 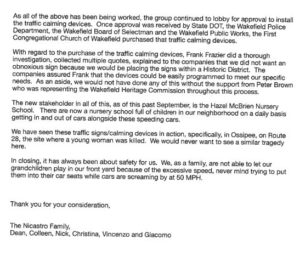 It seems that everyone was on board….even Pam Wiggin, chairperson of the Wakefield Heritage Commission, and the pastor of the church. Have a look:
Click for larger view.

Everything was hunky dory until Pam Wiggin was informed that one of the signs would be placed in front of her property. Since then, everything has changed. To her credit, we all know that Pam Wiggin gets things done. We all admire her leadership of the Heritage Commission and its historical building restoration achievements. But this time, there is clear evidence that she has pulled out all the stops in an all out effort to get the installation of these signs UNDONE. She even pulled her Heritage Commission together and insisted they have a vote to prohibit the signs. She has asked for an audience with the Selectmen on August 14 to possibly exercise her political clout to get their support to stop the sign installation.

OPINION: It's a "me first" world out there. I'm probably just as guilty as the next guy. We can't control how others think or what they do but we need to be cautious about allowing THEM to control US. It’s bad enough that someone thinks that their personal view is more important than the safety of the public, but using a Town Commission to advance a personal agenda was never its intended use. When you get to the point of establishing ownership over the whole Town, (including the State's public right of way) and your actions indicate that you think you are more important than others, it's time to step down.

As for the actions of the church, all I can say is:
1: If these traffic calming signs are not installed, tell your parishioners to say their prayers BEFORE leaving their car.
2: You better build a bigger confession booth. Based on recent statements made from your group, you’re gonna need it when this is over.

The church representatives were completely on board with this from the beginning. They attended the meetings, supported the initiative, asked for the money and even BOUGHT THE SIGNS! They’ve dropped this like a hot potato ever since they were contacted by Pam Wiggin. Why has the story changed? Why is everyone looking for excuses to distance themselves from this now? And why is a lack of parking being dumped on the Town as being our problem?
Here is the July 23 letter from the church to the Town. Click for larger view. 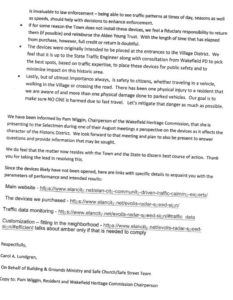 It's absurd for them to state that: “…the Town owns the devices…” when both the State and the Selectmen were very clear all along that they were NOT going to own them or ask the taxpayer to cover any maintenance costs. Through the process, the church was on board with accepting responsibility for the care and maintenance of the signs. Their letter acknowledges this. Looking for loopholes to shirk responsibility for the $7000-already-bought-by-you signs by stating: “…we can’t insure something we don’t own…” doesn't sound like anything I ever heard in Sunday School.

YOU folks bought them. The Town has never accepted them as ours. They’re merely sitting in a Town shed waiting for installation. I maintain that you do own them and you don’t need insurance to accept responsibility for their care and maintenance. You just have to agree to cover any costs if they need fixing. If a motorist hits one, chances are their insurance will pay the bill. I can’t see any real liability. It’s not like the sign is going to jump out in front of a car. It’s possible a sign could be hit by a State snowplow. This would create an expense but it’s rare that this happens.

Regarding one resident's apparent (lawn) control issues, I think you can get a pill for that. As a community, we cannot allow one person’s private agenda to overshadow a public safety issue that affects us all, no matter how powerful they think they are. I wouldn’t want a sign in front of my property either, but there may be some wiggle room to move them a few feet to a more acceptable location. I am not hearing about anything like this being discussed.

Regarding the church’s recent wishy-washy position, isn’t it all about standing up for what you believe is right? We get focused on a word like “liability” and it sends us all running for cover. Now that this speeding safety issue has been raised, worked on, solutions researched and agreed to, what’s gonna happen if the signs are returned and then someone gets hurt or worse? Who will take responsibility for that? Who will stand up and say “I am liable for what happened because I didn't do the right thing to protect lives”? If something bad happens now, there won’t be enough prayers in Town to save us from the guilt of knowing we could have done so much better.

Note: if you like to read, here is the entire pdf collection of public documents on this issue that I requested by using the right-to-know-laws.
churchsigns